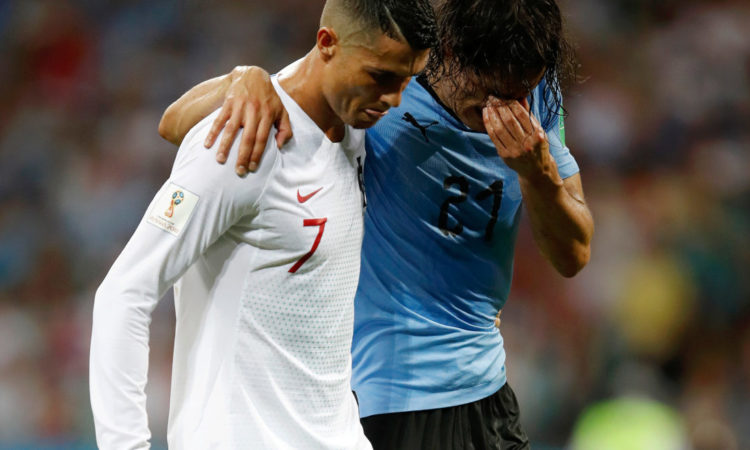 At last, the two dominated world best players for the past decade have been eliminated from the world cup tournament in Russia on the same day and Cristiano Ronaldo makes a wonderful comment that made the world hold him high.

Before hand it was hinted that this 2018 World cup will be their last outing with their various countries, the only trophy medal lacking in their laden cabinet, which they are zealous to win before retirement.

Nevertheless, Cristiano Ronaldo bowed out from the competition with his Portugal teammates just after hours that Lionel Messi and Argentina lost 4-3 to France, while Portugal were beaten 2-1 by Uruguay as seen on footballonthemove.net

Ronaldo wished Uruguay well after losing to them, he also hailed world football governing body FIFA and the host country Russia for a wonderful treatment, but refused to speak about whether he will continue or not with the National team.

When asked about the match with Uruguay, he said (We must congratulate Uruguay because they are the national team that are in the quarter-finals, I think we played a good game and maybe we deserved more, but in football the ones that score the most goals win and they scored two, so congratulations. We leave with our heads held high. As the captain of Portugal I know how hard we have worked and we must be proud of the team. And I also want to congratulate the organisation of this World Cup, it has been fantastic in every way; the organisation, the security, the atmosphere is perfect and it must be said. We go with our heads held high and we are sure that this team will continue to win things).

The next World cup in Qatar 2022, the Real Madrid forward will be 37 years, but the Ronaldo can’t be ruled out from making it to Qatar.

Notwithstanding, this year’s tournament would have been his realistic opportunity to lift the biggest trophy in the World of football, but was so disappointed by being eliminated at the round of 16.

Ronaldo got more frustrated as he was yellow carded for shouting at the centre referee Cesar Arturo Ramos when he went against Portugal in making a vital decision at the later stage of the game.

However, many football supporters were anticipating to hearing the 33-year-old Portuguese to make a likely statement about his future as he did against Liverpool in the Champions League final.

He stole the show off his teammate Gareth bale, who presumed as the hero after his heroic display against Liverpool after they won 3-1, he made it known to the media of his intention about leaving the Spanish giants.

Real Madrid fans criticized his statements and tagged it quite disappointing from Ronaldo.

The Portuguese superstar surprised the world positively yesterday night with his benevolence act.

He took it upon himself, acting as a help to Edison Cavani who had earlier scored the deserving two goals against Portugal off the pitch when he picked up an injury. And his comment during interview was so positive.

Ronaldo about his Future

When quizzed about his future, he said (It’s not the time to talk about the future, when it comes to the players and coach, this team will continue to be one of the best in the world, with quality players, a young group, united. I am confident and happy because this team will always fight with all their strength).

Meanwhile, before the tournament, Ronaldo had spoken about his wish to continue playing and predicted that based on his strength so far, he will still make more two world cup appearances ahead, meaning that he will be bowing out of the National team at 41.

We are hoping to see how this plays out in the future.