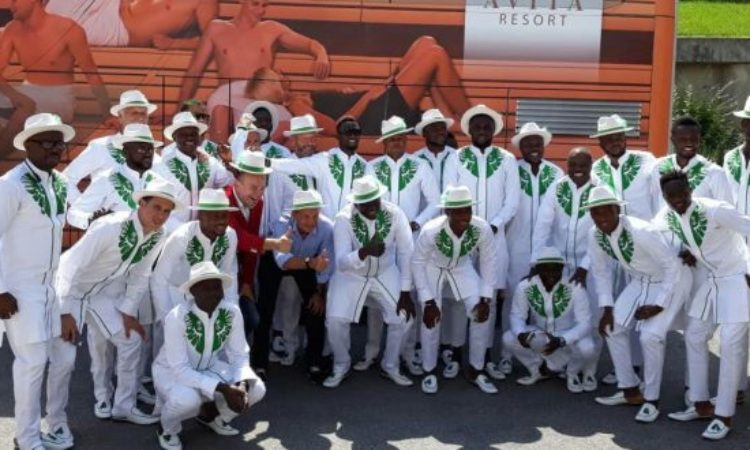 Winning Secret Behind the Style Nigeria Arrived Russia In

The Super Eagles arrive Russia donning white and green ensembles and posed for pictures as they hit off another fashion statement prior to the start of the World Cup on Thursday.The fabrics reportedly made by a local designer  caused a stir amongst passers by who were clearly impressed with the prints which reflected the identity of the 48th FIFA ranked team.

The outfits are thus trending on social media and comes in the
aftermath of the team’s Nike Jersey which sold out in minutes after
its introduction to the public.

However, manager Bernard Rohr has insisted his team are more than
about making fashion statements and are rather focused on getting
ready for their opening group match against Croatia on June 16.
“We are happy to be here after working so hard. But we continue to
work and we continue to be humble and we will be ready for Croatia
because the first game, it is a very important game, not the clothes,”
The Belgian Coach told KweséESPN.

The West Africans upon arrival were hosted to a  brief welcome party
by the hotel staff and few Nigerians, who were majorly students at the
Essentuki Institiute of Management, Business and Law in Essentuki.

Mikel Obi led team are in Group G and will face Croatia on June 16 at
the Kaliningrad Stadium,then proceeding to face Iceland six days later
and eventually rounding off the group matches with an highly
anticipated clash against Argentina at St Petersburg Staduim on the
26th.